J o Ann Castle is one of those amazing women who make the rest of us wonder what the heck we have to whine about. Introduced to show biz at the age of 12, she’s been through several solo careers, two bouts with the Lawrence Welk «family,» three marriages, a change of instruments, and more encounters with other top scoring events on the «Social Readjustment Rating Scale than three or four ordinary lives put together. 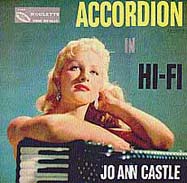 Perhaps that explains a little of her piano style. Her press releases call it a combination of «the veracity of Jerry Lee Lewis and the flamboyance of Liberace,» but TV Guide more accurately quipped that, «Jo Ann Castle doesn’t tickle the Ivories, she hammers them—as if she is building the piano instead of playing it.»

Castle started performing at the age of three, and by her early teens, was appearing at shows and clubs south of Los Angeles, playing the accordion and piano and singing. Something of a blonde bombshell herself in the age of Marilyn Monroe and Jayne Mansfield, she was soon getting spots on Hollywood radio and TV shows. She played rooms at the Dunes and the Fremont Hotel in Las Vegas before she was old enough to order a drink, and recorded her first album, for Roulette Records, which includes a smoking cover of «Flight of the Bumblebee,» before she turned 19.

Welk heard the album and invited her to appear on his television show, but with two accordion players on the show already (himself and Myron Floren), he requested Castle to play a honky-tonk piano number. Never one to ignore the ratings, Welk noticed Castle’s popularity with the male viewers, and decided to ease her into the spot occupied by Big Tiny Little. He announced the move with great fanfare by inviting Castle to appear on her 20th birthday and then surprising her with a cake and the contract offer.

For the next 10 years, Castle pounded her way through hundreds of shows and hundreds of corny tunes. «I told Lawrence I had 300 numbers in my library, but I really only had three, so I had to work like crazy to expand my repertoire,» she later remembered. She conformed to the same rigid rules as the rest of the Welk corps, such a prohibition against pants for women and appearing behind a barrel when her pregnancy grew too big to hide under a skirt. Even the steady income that attracted and kept most of Welk’s musicians wasn’t enough, though, and she decided in 1970 to leave the show.

«I’d been with him for nearly 10 years and I was becoming frustrated and stale. I needed to break out of the mold, and I knew that once Lawrence typecast you, that was it,» she told an interviewer. Unfortunately, her popularity couldn’t overcome the barrage of crises that came crashing in on her over the next few years.

Once divorced and raising a daughter with cerebral palsy, Castle had married again in 1967 and quickly had two more children. But the married soured not long after she left Welk, and «As a result, my career went to hell in a handbasket,» she recalled. The Silent Majority that made up her audience hunkered down for the seventies, bookings became scarce. Soon she was grateful to be playing to boozers and losers in a Vegas cocktail bar. She lost her first daughter, divorced, married again, discovered her first husband was abusive, lost her house, took to drinking and eating, and within a few years was up to 300 pounds and sleeping on her sister’s couch. She moved her family to Arkansas and spent the next few years just getting by.

Finally, in 1986, she decided to rebuild her career. She cut her weight in half, dumped her husband, and started getting a few gigs as a singer as well as a piano player. Randy Wood signed her to his post-Dot label, Ranwood, and she became a regular in an ever-increasing series of Welk alumni reunion shows around the country.

By the start of the 1990s, she was booking shows a year ahead, and was getting back to her prime. Lawrence Welk, Jr. invited her and the Lennon Sisters to jump on the glittering bandwagon of the new Vegas of the Midwest, Branson, Missouri, and from 1994 to early 2001, she was a headliner at the Lawrence Welk Champagne Theater there. She climbed back up the ladder of celebrity far enough to be chosen for a spot on the Arkansas Walk of Fame in Hot Springs.

She quit the Welk show in Branson in 2001 and has kept up a busy schedule of solo and duo appearances ever since, including hosting a PBS special on Liberace in 2002.

Most space age pop fans will find a little of Castle’s honky-tonk piano goes a long ways. Her one accordion LP remains among the best sets of accordion wizardry to be set to vinyl, and her Hawaiian album is worth at least one listen for its sheer audacity in mixing two oil-and-water genres.

Jo Ann Castle (born Jo Ann Zering on September 3, 1939, in Bakersfield, California, United States) is a noted ragtime pianist. She adopted the stage name «Castle» from a type of accordion, another instrument she played with great proficiency. She was often referred to as «Queen of the Ragtime Pianists,» and was seen as the younger version of star ragtime pianist Del Wood.

Castle has released sixteen albums throughout her career. She is most known for being the central ragtime performer on The Lawrence Welk Show, on which she performed from 1959 to 1969. Originally discovered for Welk by Joe Feeney, Castle became a permanent member of the «Welk Family» just prior to her twentieth birthday, replacing the departing Big Tiny Little. Welk wished to announce her age on the air, when she informed him that revealing her actual age publicly would jeopardize her budding career as a Las Vegas entertainer. At first nonplussed, he then surprised her on air a week later with a piano-decorated cake and announcing her hiring as one of his «champagne music-makers». On the show, she was known for playing the «Red Hot Piano».

In the 1990s, Castle performed for fans at the Lawrence Welk-owned Champagne Theater in Branson, Missouri, as well as making a guest appearance for a show with Jimmy Sturr and His Orchestra on RFD TV. 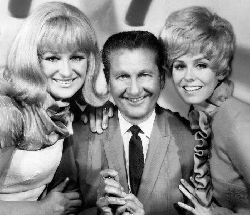 Jo Ann Castle (born Jo Ann Zwering on September 3, 1939, in Bakersfield, California, United States) was a honky-tonk pianist on The Lawrence Welk Show. Her offstage personal struggles made her infamous among bandmembers. She adopted the stage name «Castle» from the name of an accordion manufacturer, another instrument she played with great proficiency. She was often referred to as «Queen of the Honky-Tonk Piano» by Lawrence Welk himself.

Originally discovered for Welk by Joe Feeney in 1959, Castle became a permanent member of the «Welk Family» just prior to her twentieth birthday, replacing the departing Big Tiny Little. Welk wished to announce her age on the air, but she informed him that revealing her actual age publicly would jeopardize her job as an underage Las Vegas bar and nightclub entertainer. At first nonplussed, he then surprised her on air a week later with a cake and announcing her hiring. Shortly after joining the Show, Castle eloped and married cameraman, Dean Hall. They divorced in 1966 after having a daughter together. Castle met and married Bill Roeschlein in 1968, with whom she had a son and a daughter. Castle left the Welk Show in 1969 and divorced Roeschlein in 1971. Her third marriage, in 1978, ended in 1986.

In the 1990s, Castle performed at the Lawrence Welk-owned Champagne Theater in Branson, Missouri, as well as making a guest appearance for a show with Jimmy Sturr and His Orchestra on RFD TV. Castle suffered a series of strokes and drug overdoses in 2005 and 2009.

On September 3, 2011, Castle married her fourth husband, Lin Biviano, a tambourine player and hairstylist from Boston.